Remember the Golden Rule: "Always sow the seeds - you can catch up on everything else later except that!"  With day length shortening and decreasing light available to plants - it is vital that some crops are sown as soon as possible now if you want plenty of winter food. 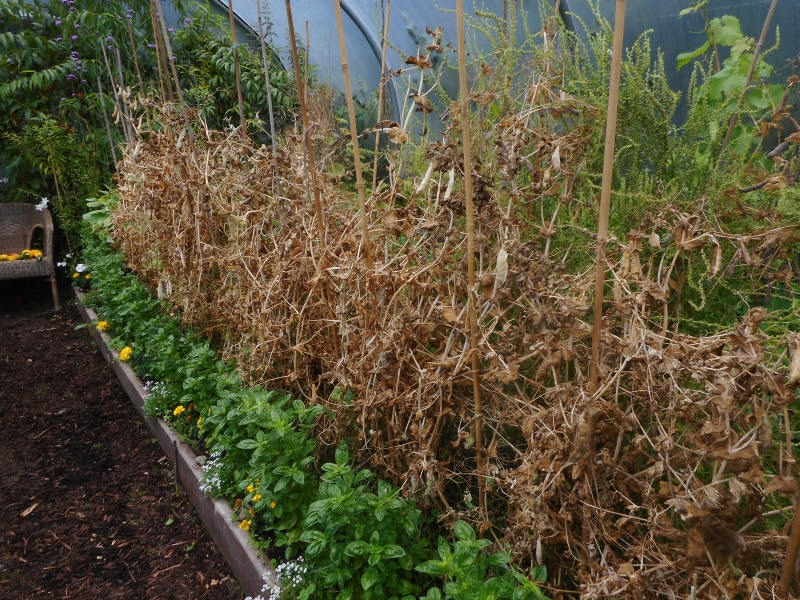 Two varieties of mangetout peas for soup, sprouting & seed, kale rear centre beside peach, and perpetual spinach beet. Growing and saving our own seed is growing our own food security - and in these uncertain times everything we can do for ourselves gives us more independence!
Sow outdoors in pots or modules:
(For planting later in the tunnel or greenhouse, when summer crops are cleared. These will all crop in late autumn/early winter - some like chard, perpetual spinach beet & kale will crop steadily over the winter.)
Calabrese* ('Green Magic' is a great variety that crops well all autumn and over the winter in the tunnel if picked regularly, and protected from serious frost with fleece), 'Kaibroc' (Marshalls - fast cropping, delicious kale/broccoli hybrid). Cabbages 'Greyhound' & leafy non-hearting spring collard types, carrots (early 'Nantes' types, in long modules or pots), kales such as Cavalo Nero, dwarf green curled and Ragged Jack, lettuces** non-hearting leafy types (like Lattughino, Lollo Rossa, oak leaf & Jack Ice), winter 'Gem' & winter butterheads, endives, kohl rabi*, Swiss chards & leaf beets, beetroot 'Bull's Blood' and 'McGregor's Favourite' for salad leaves**, peas (for pea shoots), sugar loaf chicory* (Pain de Sucre), Claytonia**(miner's lettuce), American land cress**, watercress, leaf chicories (radicchio), rocket**, summer turnips**, coriander**, chervil**, plain-leaved and curled parsley, and sorrel.
Covering seed trays while they are outdoors, with a fine mesh-covered frame or cloche, gives young seedlings protection from pests (like cabbage root fly and cabbage white butterflies), and also provides shelter from scorching sun, strong winds or heavy rain.
You could also now plant a few early variety potato tubers in pots anytime from early to mid-August - to bring inside later for a Christmas crop. 'Autumn planting ready' types are available now in garden centres if you haven't saved your own seed tubers from your first or second-early crops, or held some back from earlier spring planting.

Outdoors, sow in modules, in a seedbed for transplanting, or in situ where they are to crop:

(To possibly cover with cloches or frames later in autumn.)

If you don't get many crops sown now, they won't have enough time to develop to crop well over winter, as with the shortening days now all growth slows dramatically within a couple of weeks. Another thing! - Remember that these are just suggestions - you don't have to sow them all!

If I was forced to choose only six veg to grow over the winter in my polytunnel they would be Ragged Jack Kale, Ruby or Silver Swiss chards, Perpetual Spinach Beet, Watercress, lettuces Lattughino and Jack Ice, and Sugar Loaf Chicory. They are all incredibly productive over even the hardest winter in a polytunnel, or protected with cloches outside - often continuing well into spring.

N.B. Sow in the evenings if possible as germination of some varieties of seeds can sometimes be affected or even prevented altogether by too high a temperature during the first 24 - 48 hours - this applies particularly to lettuce, spinach, celery and also greenhouse sown carrots. Protect module-sown seedlings outside from heavy rain or strong sunlight with a plastic mesh such as 'Enviromesh' - which also protects against carrot root fly, cabbage white caterpillars and cabbage root fly - all of which can still decimate unprotected seedlings. Old net curtains work well too! Sowing in modules on a table, or raised area outside also provides seedlings with good protection from slugs.

(P.S. I really enjoy sharing my original ideas and 40 years experience of growing and cooking my own organic food with you. It's most satisfying and naturally also very complimentary if others find "inspiration" in my work......But if you do happen to copy any of my material, or repeat it in any way online - I would appreciate it very much if you would please mention that it originally came from me, as it's the result of many years of hard work and hard won-experience. Thank you.)