"Remember - always sow the seeds. You can catch up on everything else - but if you get behind on that, there's nothing you can do about it." ....
That means do it NOW!  Every day, light is getting shorter and growth is slowing. - In the UK and Ireland we're facing some uncertainty of supplies due to Brexit - so anything you can sow now may give you some vitally important fresh salads etc, if there is a shortage of fresh winter vegetables! 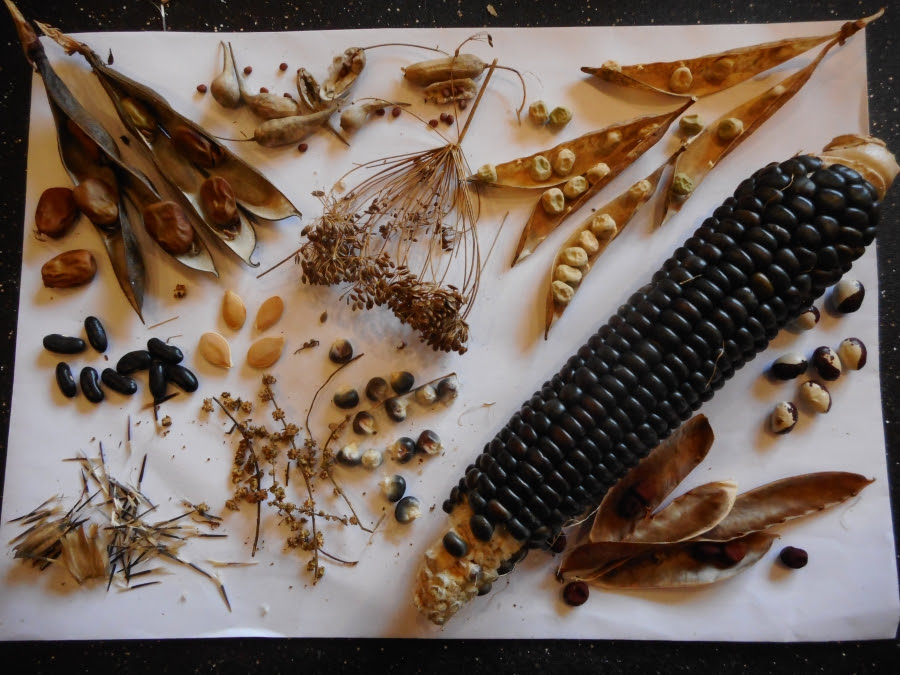 On any empty patches of ground already cleared of crops that won't be used over winter:
Sow green manures now such as alfalfa, red clover, mustard (a brassica so be careful watch rotations) winter tares, field beans, fenugreek, phacelia and Hungarian grazing rye. These will help to protect and improve soil, mop up nutrients to stop them leaching in heavy rain - resulting in them being lost and polluting groundwater. Green manures or even weeds will 'lock-up' carbon, hold onto nutrients and feed worms later, when cut down and covered. Dig them in or cut down and leave on surface later after the first frosts, then cover with something waterproof to protect the soil, prevent nutrient loss and possible pollution. The worms will then work on incorporating the plant material into the soil over the winter - leaving you a perfect, weed free, warmer, more friable and more fertile soil to start your spring sowings next year. Don't leave manure or mulches uncovered now, otherwise you will cause pollution - whatever some of the devotees of that practice may say!!
Also sow a few hardy annuals, to flower over the winter in polytunnels and greenhouses, and early next year outside for bees and other pollinators which either don't hibernate or emerge in early spring. Bees and other insects are the basis of all life on earth - and they need all the help they can get now!
If you want new potatoes for Christmas -
You could also still plant a few sprouted potato tubers in pots before mid-Sept. - to bring into the greenhouse or tunnel later.  'Autumn planting ready' types are available now in garden centres - or if you have any small tubers of 1st or 2nd earlies you've kept from your spring crop, or 'Mayan Gold' or 'Apache' lifted in spring/summer - put them in the fridge for a couple of weeks - then bring into the warm and keep dark for a few days - this will initiate sprouting of shoots - Mayan Gold and Apache are great-tasting potatoes which are not day-length sensitive and will grow quite happily at any season of the year. Lady Christl is also good and always the fastest to bulk up but Sharpe's Express and Duke of York are also good. The sooner you plant them the better now. Give them really good air circulation once they are above the surface - to avoid late blight and don't wet the leaves when watering as doing this encourages it.
*Best sown in early September
And don't forget there's still just time to plant some saffron bulbs (see last month).
Saving our own seed gives us a measure of resilience and independence from the global giant agrichemical/seed companies who are increasingly buying up small independent seed companies with the aim of controlling the global food supply and increasing their profits by selling more of their exclusive patented F1 hybrids.  At the same time they are ditching tried and tested old varieties which have stood the test of time and may have traits far more useful to home gardeners, like not all being ready at once!  Open-pollinated varieties may also have the genetic resources to be more adaptable to the variability of weather conditions due to climate change.  If you do one thing next year - plan to grow at least one non-F1 hybrid, open-pollinated variety of one of your favourite vegetables to save seed from.  I guarantee you'll be so glad you did. and if you haven't done it before - so thrilled and proud when you grow your first crop from home-saved seed!

Despite all the years I've been gardening - I never cease to be surprised, thrilled and full of wonder at Nature's miracle of a tiny seed and it's determination to grow. That perfect little pre-programmed package of DNA - full of ancient history, the spiritual fingerprint of all those gardeners who have grown and saved them before us, and priceless, unique and irreplaceable genes.  And best of all - packed with a delicious promise of healthy food in the future!