The Polytunnel Potager in January/February - 2022

January contents:  Should we throw away old seeds as some experts advise?....  It's NEVER been more important to either grow some organic food, or to support planet friendly organic farming!... Clean air, water and living soil are precious....There's always lots of healthy food in a well-planted polytunnel....  Growing anything well is about care and attention to detail.....  One of the commonest complaints I hear is "my children won't eat vegetables"!.....Time to plant some 'extra early ' potatoes in pots in mid January.....Use it or lose it! Making use of every inch of soil is what Nature does!... Rotational thinking.... Don't have empty, uncovered ground now either outside or in the tunnel.... Get your worms working for you! 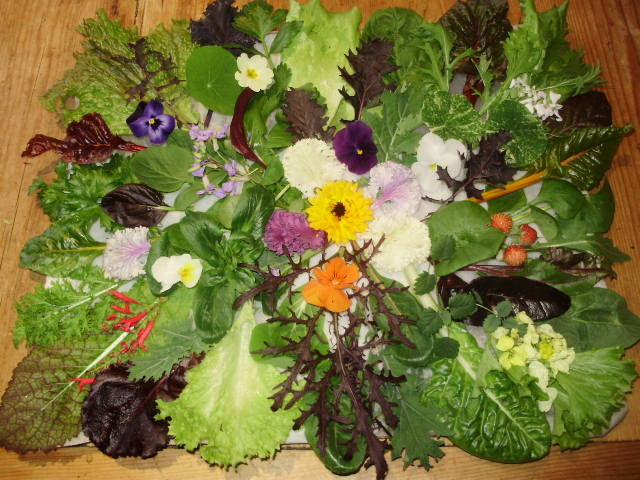 There's just nothing like those juicy, fresh green shoots of the watercress and all the other salads, urgently pushing up towards the light, to rekindle that eternal gardener's optimism at this time of year.  There's also nothing like them to keep winter colds at bay either! Just now I'm looking forward to yet another lunch of the Organic Cashel Blue cheese, pear and watercress salad that I did for one of our Tunnel to Table programmes - I just can't get enough of it at the moment and eat it almost every day as it's so delicious and nutritious! The peppery nutrient-rich leaves of watercress combine so well with anything though - and my walnut, avocado oil, cider vinegar and honey dressing is the perfect complement drizzled over it!  Watercress is so easy, yummy and chock-full of healthy, cancer-fighting phytochemicals!

Watercress is a truly perennial herb. In the summer when the polytunnel would be too hot for it - I pull up a few roots to grow outside in a shady damp spot - then in the autumn I just take cuttings of those to plant again in a new spot in the polytunnel. Remember if you grow it though - that it's a member of the brassica family and must go in that section of your rotation, wherever you grow it. The only pest that attacks it is the cabbage white butterfly - whose eggs are hard to spot on watercress and one often doesn't notice them until the entire plant has been defoliated and only stems are left! So keeping it covered with fine netting in summer will prevent this and also give it a bit more of the shade it appreciates.

We really enjoyed the 'Purple Majesty' and 'Violetta' potatoes which I planted in 10lt. pots in early September with our Christmas and New Year meals. They added a lot of colour, phytonutrients and wonderful flavour. Their siblings, along with several other varieties that I saved for planting this Jan and spring are already raring to go - with lovely sprouts on. Several people have told me Purple Majesty seems to be quite difficult to get as seed tubers at the moment.Luckily I always save the most perfect potatoes from my own crops as my own seed for planting the following year. I've been saving them for several years now, originally from potatoes I bought in a supermarket. It's quite legal to do this as long as you don't sell the seed, and it's a great way to pick up new varieties! This avoids possibly bring in diseases and there's also apparently some evidence that they may acclimatise to your particular garden after a couple of years. You should only ever save the very cleanest, most blemish-free seed tubers from the healthiest plants for doing this. I'll be planting some of these and several other earlier cropping varieties in the middle of this month in 2lt. pots, for planting out later in the tunnel. This ensures that I always have some delicious 'extra early potatoes for Easter - whenever that comes in the calendar! The terrific thing about a tunnel or greenhouse is that it allows you to experiment with many crops that would never do well outside in our climate - and there are also plenty of crops normally grown outdoors here in winter that are so much more productive under cover. Swiss chard and kale are very good examples - and also crops that are never much good outside in average summers here. Melons for example will revel in the tunnel's humid summer warmth and can be really productive. There are far more varieties available now than there were a few years ago. There seem to be a lot more varieties of lettuce suitable for winter growing too - I'm going to trial a few more this year - mostly loose leaf 'picking' varieties as these are the most valuable - giving such a long period of cropping. Although they're as tough as old boots and can recover completely from being frozen to a crisp - endives really enjoy the indoor life too. They're more disease-resistant than most winter lettuce and the slugs don't seem to like them quite as much either - which is useful. I discovered a nice pale leaved one a few years ago called 'White Curled'. It isn't as bitter as the normal types which I normally blanch for a week or so before picking. I pick individual leaves of 'White Curled' all winter long - they're very decorative in a mixed salad - making a nice contrast with their pretty, finely cut leaves of pale lemony-green. I originally got it from Simpson's seeds but as it's what's known as an 'open-pollinated variety - not an 'F1' hybrid - I save my own seed now every couple of years which saves money too. I mark the best plant for later on, then in spring I'll let it flower. The bees absolutely adore it so they pollinate it for me and then it sets seed. That keeps both the bees and me happy - a double whammy!

Use it or lose it! Making use of every inch of soil is what Nature does!

'Inter-cropping' - or growing fast-growing crops to cover the ground between slower maturing crops is something I've always done since I first started gardening in a tiny space 45 years ago. It's the way to make best possible use of every inch of any space. To me it's always seemed common sense that there's no point in leaving ground bare between rows of slower growing things and just hoeing or weeding, if something useful and edible could be growing there!  If there isn't room for something to grow, or it doesn't fit into your rotation - which is very important - then an organic mulch of some kind - either compost or grass clippings - is always a good idea.

Soil should never be left bare. If you observe nature you'll see that it always populates ground with something - often with what us gardeners tend to think of as weeds!  Bare soil is only natural at times in a desert - but even that isn't really bare - it's full of indigenous plant seeds just waiting for some precious rain so that they can spring to life, flower and seed again. Soil should be covered with something all the time, to prevent erosion, loss of carbon, minerals and nutrients. Covering soil with an organic mulch also feeds soil life like worms and protects the microbial life which makes humus. So my gut feeling was right!

Someone who has been reading my blog for a while did a Twitter survey a while ago to see how many people covered their soil in winter.  I was astonished to see how many still cling to the old way of leaving soil completely bare over the winter, so that the surface is broken up to a fine tilth (to use the old expression) by frost. Before the advent of soil-damaging chemical fertilisers in the early 20th century - you could get away with doing do this as soil was then still full of humus which literally 'glues' the soil particles together - and which had built up millennia - first by the actions of Nature and later by gardeners adding manure and composts to soils in order to fertilise crops. With climate change bringing more extremes of weather - it's now neither sensible nor environmentally acceptable to do this. Soil MUST be protected - it is a valuable resource, and if it's left open to the weather in winter can literally just wash away carrying most of it's nutrients. Failing a green manure or existing over-wintering crops to protect it's surface and retain nutrients - a good organic mulch even covered with old cardboard, carpet or polythene is better than nothing and will stop rain washing through it!  But NEVER leave compost, or manure-covered ground open to the weather either - that's worse than covering it with nothing. It doesn't just lose valuable nutrients but it causes serious pollution of groundwater too!  As I'm always saying - it doesn't matter that the ground may later produce very good crops. That is a selfish point of view and is only proof that far too much was probably put on the ground in the first place - since much of the nutrients would have been completely washed away! Here endeth yet another manure rant!
In my garden I often tend to go one step even further than 'inter-cropping' by doing what I call - 'continuous layered cropping'. This means constantly overlapping crops - which can get pretty hectic at times!  Maybe it should be called 'extreme inter-cropping' instead! Some people have now named this type of gardening 'polyculture'. A very neat new name for an old practice which many of the old self-sufficient cottage gardeners always did!  I started doing this when I only had a tiny garden over 40 years ago  - but even though I now have plenty of space, I still do it because plants seem much happier growing that way, as long as they have enough air circulation to avoid diseases - and to me it has always just seemed a far more natural way to grow. After all - Nature does it all the time. You need to plan well in advance for this type of cropping though. You also to know roughly how long each crop takes to grow and importantly - how much room it will need as it grows. Whether it needs full sun or won't mind a bit of shade. You have to be extremely careful with watering and ventilation with close cropping too, in order to avoid disease, particularly under cover in a polytunnel or cold frame where there's less air circulation. You also need to keep an eye out for any slugs which may be lurking around with all the extra shelter!  If you're not careful with this kind of snug-fit gardening - you can end up with the green 'mess' similar to many 'so-called' permaculture gardens I've seen. Nature loves messy gardens which is good I'll grant you - but they don't produce much in the way of crops and surely that's the point?
It's fun sometimes pushing the limits a bit - it's something I've always liked to do with my gardening. You learn a lot by trying different things and every garden is different. I'm constantly experimenting - it's fun. As I've mentioned - planning well really is of the essence. That's why sitting in your polytunnel, having a good look around and making notes can be really valuable at this time of year, when there's not too much urgent work to do. When growth really starts to take off again and you're busy sowing seeds etc - you don't want to waste time wondering exactly where you were going to plant things - or perhaps waste plants because you've got no room to plant them!  Although I must say there's always a queue of grateful recipients for any of my spare plants! There really is no excuse not to have a good range of winter salads in your tunnel or greenhouse, or even under large cloches if you plan well and grow the right things. There's more choice than ever in the catalogues now. 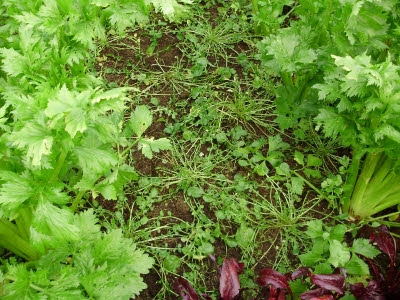 Don't have empty, uncovered ground now either outside or in the tunnel 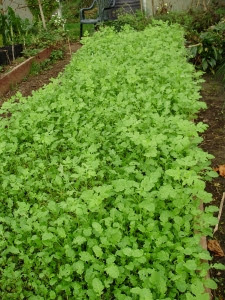